Three strategies for incumbent banks to jump aboard Digital Lending 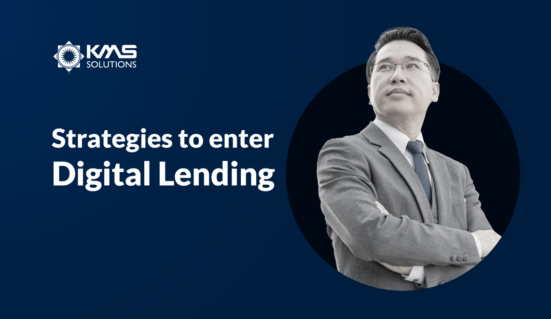 Building a new lending product from scratch, buying a pre-built digital lending platform, or partnering with fintech startups are the three most viable models for traditional banks to jump into the Digital Lending market, according to Digital Banking leaders from KMS Solutions, Mambu, and Kuliza.

This article is also featured on VIR (English) and thoibaonganhang (Vietnamese)

Digital lending is now one of the hottest things in the global BFSI market. This niche is so promising that Boston Consulting Group predicted that, within the next 5 years, it would digitally disburse a total of $1 trillion in retail loans alone. Nevertheless, digital lending in Vietnam is still at an embryonic stage, where it is provided only by fintech players and appears to be foreign to traditional banks. In fact, there are only a handful of domestic banks providing this service.

The digital lending market in the upcoming time will become livelier and more booming, due to the following 4 factors.

First, consumers have become savvy in technology, especially Gen Z. As a change of behavior, people now want all financial services and interactions with banks to be done via mobile devices, rather than at banks’ branches.

Second, most of the recent banking innovations such as eKYC, Pay Now Pay Later, and digital lending are the brainchildren of fintech companies—a market force that has been and will be threatening traditional banks.

Third, the government and the State Bank of Vietnam have been continuously introducing new policies in an attempt to promote the digital banking revolution. Most recently, the decision 810/QĐ-NHNN was passed.

Finally, against the backdrop of the COVID-19 epidemic, it is no longer viable nor possible to rely on the “brick-and-mortar” model where long lines of customers wait for their turn to apply for a loan or to be disbursed. Banks are pushed to digitize all their services and operations so as not to lose customers to fintech startups, especially in the lending space—the most profitable function of banking businesses.

There are three popular models that banks can adopt to enter the digital lending fray, according to Le Huu Tan Tai, Director of BFSI at KMS Solutions.

For the time being, the global digital lending market is deemed a level playing field between banks and fintech companies. To keep up, banking giants chose to compete head-to-head by building their own digital lending platform. Goldman Sachs is the one spearheading this movement. In 2017, this multinational bank launched Marcus, a self-developed digital lending platform, with only one goal: vying with fintech start-ups for shares of the lucrative digital lending niche. It became a major success by 2018 as Goldman Sachs announced that Marcus had disbursed nearly $2 billion to more than 350,000 consumers. The platform’s rate of return is reportedly four times that of the whole group combined.

Or Hello Banks! was designed by PNB Paribas as a digital-only bank. Not limited to digital lending alone, Hello Banks! also offers a wide range of other financial services such as savings, brokerage, or insurance. To date, the platform has reached nearly 2.5 million consumers.

However, this homegrown approach has yet to be applied widely in Vietnam. The most notable case is $nap, a lending application developed by the credit institution FE Credit.

Building such a full-fledged digital lending product can be daunting, requiring lots of resources. This is the reason why many of Vietnam’s banks seem reluctant to take this approach. If they ever do, they would be better off outsourcing the product development to an external agency, due to the dearth of resources. “On average it takes 12 months to 18 months to build a platform from scratch” shared Tai Le.

That being said, this model offers a decisive perk: it allows banks to have absolute control over the homegrown app, including what features it has or what it will look like. This is contrary to the partnership model, which is discussed right below.

In this model, fintech companies act as an intermediary, using their digital platform to broker banks’ lending services. An example of this approach is National Australia Bank working with Xero, an accounting software company, to enhance data for the underwriting process.

In Vietnam, there is AVAY partnering with VIB Bank and VPBank. This application helps users search for loans with high rates of disbursement. Another one is Dragon Lend, which connects businesses in need of funds with suitable banks and financial institutions.

“The key advantage of this model is that banks can quickly jump onto the digital lending bandwagon. The cost is almost negligible because there is already a business model available from the partner side. The only thing the bank needs to do is to evaluate compliance and sign the partnership agreement,” said Mr. Pham Quang Minh, General Manager of Mambu Vietnam.

However, teaming up with fintech companies puts banks into a dependent state, which is undesirable because they will have little or no say in the development or the management of the partner’s platform.

This model is deemed the most practicable one at the moment, in that banks will purchase a license of a SaaS lending platform provided by a third party.

As a combination of the two models above, a pre-built platform can offer the best of both worlds. On the one hand, banks can save most of the time and manpower associated with developing a new product from scratch. On the other, they can freely customize or add new features to the available lending platform. In addition, the maintenance and testing of the platform is the responsibility of the partner, which in turn helps banks save resources thereafter.

“Low-code digital lending platforms can help financial institutions reduce their turnaround time by up to 50% and go live with new products in a few days”, said Kaushal Sarda, CEO of Kuliza.

Vietnam’s banks are already getting used to Finastra, Kuliza, Fiserv, or Temenos, which are world-leading providers of digital banking solutions, including digital lending platforms.

“In our experience, the only problem that remains with this method is finding a partner who has mastery in consulting, developing, and deploying applications, while also having insights into the industry and the domestic market”, said Kunal Goel, Senior Vice President at Kuliza.

Le Huu Tan Tai assured that banks do not necessarily have to apply only one of the three aforementioned models. “These are not three separate paths, in which we can only choose one of the three, and refuse the others. Banks can combine digital technologies with their digital workforce to offer integrated experiences to their retail and business customers throughout the lending journeys”.

Recently, KMS Solutions has partnered with Kuliza to introduce Lend.In digital lending platform to Vietnam. Read about the release here, or discover the platform today to know how it can help incumbent banks in Vietnam digitize their lending process.

Digital Lending Platform: The only guide you’ll ever need

Stay on top of latest news for Digital Banking